Skip to content
ENA is excited to announce it has joined Zayo Group!

Located in the north central region of Indiana, Oak Hill United School Corporation (OHUSC) is a rural school district that’s embracing network virtualization by migrating to the cloud. With fewer than 2,000 students, OHUSC is leading the way by demonstrating how all school districts can experience the benefits of cloud infrastructure.

Tasked with overseeing five schools and an administration office, OHUSC’s small IT team of three – led by technology director Brandt Lynch – had their hands full managing the district’s many education technology initiatives, programs, and needs, let alone their legacy on-premises data center. When the time and resources needed to run the on-site data center began to increase, Lynch knew it was time to find a trusted cloud infrastructure solution and partner.

JOURNEYING TO THE CLOUD

A happy and loyal ENA customer for over 10 years, Lynch turned to ENA’s cloud solutions knowing they would be tailored for education and supported by the customer care he was familiar with. After a successful trial period, he began migrating OHUSC’s data center to ENA TrustCompute, ENA’s comprehensive and managed infrastructure-as-a-service (IaaS) cloud computing platform in December of 2019. Less than 6 months later, he’s transitioned nearly all the district’s servers and is beginning to reap major rewards.

“MOVING TO ENA TRUSTCOMPUTE HAS BEEN A HUGE VICTORY FOR ME AND MY SMALL STAFF,” HE SAID. “BEFORE, MANAGING OUR ON-SITE DATA CENTER WAS ONE OF OUR MANY FULL-TIME JOBS. NOW, THE TIME WE SPEND DEDICATED TO SERVER MANAGEMENT HAS DECREASED SIGNIFICANTLY AND IS MUCH MORE MANAGEABLE.”

THE COST SAVINGS OF VIRTUALIZATION

In addition to saving time, ENA TrustCompute is delivering major cost savings. Thanks to network virtualization, Lynch and his IT team no longer need to dedicate funds towards refreshing their data center hardware every 3-5 years.

“IF I DO THE MATH ON A TYPICAL SERVER ROOM REFRESH CYCLE AND COMPARE, WE’RE ACTUALLY SAVING MONEY WITH ENA TRUSTCOMPUTE,” LYNCH SAYS. “I DON’T HAVE TO WORRY ABOUT COSTS ASSOCIATED WITH THE PURCHASING CYCLE, HARDWARE, STORAGE, ON-SITE SERVERS, WINDOWS LICENSING, VIRTUALIZATION PLATFORM COST, AND MORE.”

And ENA TrustCompute’s flat-rate pricing model ensures that OHUSC will never receive a surprise bill or experience fluctuating invoices and fees – a common customer scenario with other cloud providers. “I have to predictably know how much I’m going to spend each month, so I know how much to ask for in our budget,” said Lynch.

Having worked with unintuitive and complicated cloud platforms in the past, Lynch prioritized selecting a virtual machine (VM) solution with a simple, user-friendly, and intuitive user interface (UI). “I’ve managed servers on multiple other VM platforms before and I used to dread turning up a new server for a project because of the vendor’s confusing interface,” says Lynch. “I would have to pull out notes, remember exactly where to click, and worry about making a mistake. With ENA, all that confusion is gone.” Specifically designed with the end user in mind, ENA TrustCompute’s powerful UI enables customers to quickly spin up and manage servers and VMs directly from their web browser.

“IT’S VERY EASY TO GET STARTED AND THE BEST INTERFACE I’VE WORKED WITH,” LYNCH SAYS. “I CAN FIRE UP AN ENA TRUSTCOMPUTE MACHINE IN LITERALLY MINUTES AND START WORKING ON IT RIGHT AWAY. I’VE NEVER HAD ANYTHING THIS EASY TO USE.”

Another included perk ENA TrustCompute customers can take advantage of is the platform’s growing library of VM stacks. When Lynch came across Snipe-IT – an open source asset management VM – on the platform’s stacks library, he recognized an opportunity to formalize his department’s “verbal inventory system” in a way that wasn’t possible before.

“IF I WASN’T ON ENA TRUSTCOMPUTE, I WOULD NEVER HAVE KNOWN ABOUT OR USED SNIPE-IT BECAUSE IT REQUIRES YOU TO ROLL OUT A LINUX SERVER,” HE SAYS. “WITH ONE CLICK IN ENA TRUSTCOMPUTE, I INSTANTLY HAD SNIPE-IT READY AND AVAILABLE ON MY NETWORK. ENA HELPED ME SOLVE A PROBLEM I DIDN’T EVEN KNOW THEY WERE GOING TO HELP ME SOLVE.”

Understanding the importance of responsive vendor support, Lynch also selected ENA because he knew he’d receive the same high-quality, individualized customer support he’s been accustomed to for years. “There are many cloud hosting providers and solutions to choose from, but I’ve been with ENA for over 10 years and know the quality of support I’m getting,” says Lynch. “I know I’m not going to be just another customer lost in a giant data center server farm.” Although Lynch has had very few issues, he knows ENA’s 24x7x365 customer technical assistance center (CTAC) and expert cloud engineers are always a quick call away.

“WHEN I DO NEED HELP, ENA’S SUPPORT TEAM IS TIMELY, EFFICIENT, AND DOESN’T QUIT UNTIL THE PROBLEM IS SOLVED,” HE SAYS.

For OHUSC, the move to the cloud has proven beneficial in more ways than one, but perhaps the most powerful of all is the peace of mind it brings.

“WITH STUDENTS, PARENTS, AND STAFF ACCESSING OUR INFORMATION SYSTEM SEVEN DAYS A WEEK, OUR DISTRICT IS RELYING ON ME TO ENSURE OUR INFRASTRUCTURE EXPERIENCES LITTLE TO NO DOWNTIME,” SAYS LYNCH. “ENA TRUSTCOMPUTE TAKES AWAY ANY WORRIES I HAVE ABOUT SOMETHING FAILING OR GOING WRONG WITH OUR APPLICATIONS.”

Reimagine and transform your data center strategy with ENA TrustCompute.

Learn More
“There are many cloud hosting providers and solutions to choose from, but I’ve been with ENA for over 10 years and… I know I’m not going to be just another customer lost in a giant data center server farm” – Brandt Lynch, Technology Dir. 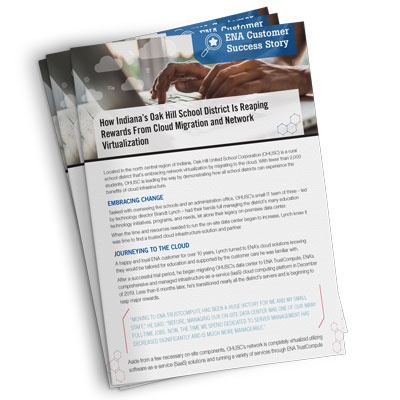 Comprehensive, reliable virtual cloud computing platform that is scalable, easy to use, and budget-friendly.
Learn More

Cloud-based storage within an industry standard API that enables users to access and manage their data via a flexible interface.
Learn More 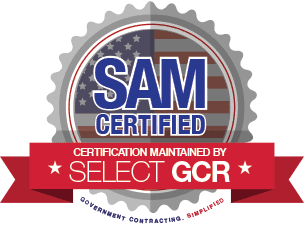